The Group 4 project is a compulsory component of the Diploma Programme and is a collaborative activity where students from different group 4 subjects (Biology, Chemistry, Computer Science and Physics) work together on a scientific or technological topic, allowing for concepts and perceptions from across the disciplines to be shared with the aim to encourage an understanding of the relationships between scientific disciplines and the overarching nature of the scientific method. 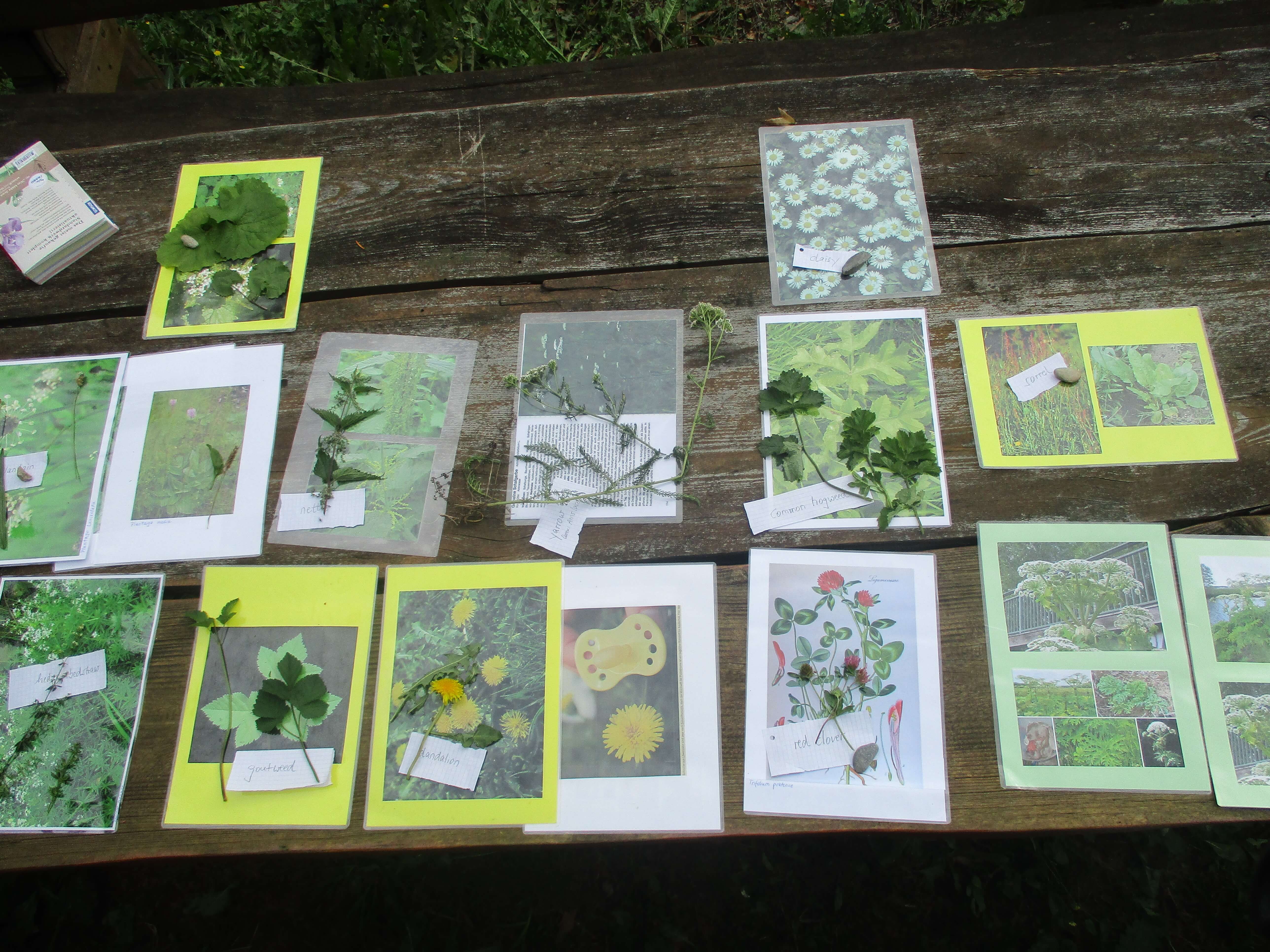 This year the IBDP Grade 12 students mixed the business with pleasure and went out on a fun collaborative outdoor trip to map wild herbs. They worked with Friederike Niestroj (Naturally Heidelberg) and Marcus Seuser (Geo-Naturpark Bergstraße-Odenwald). Along with the science of orchards and their significance for the regional economy, they learned about wild herbs and how they could be used for medicinal purposes. In addition to science, the history of the area around Posseltslust was discussed. The trip involved practical field exercises, collecting and mapping wild herbs using digital technology (two apps were used). To celebrate the success of the trip , students and their teachers enjoyed a culinary end – the preparation of wild herbs in quark with bread. 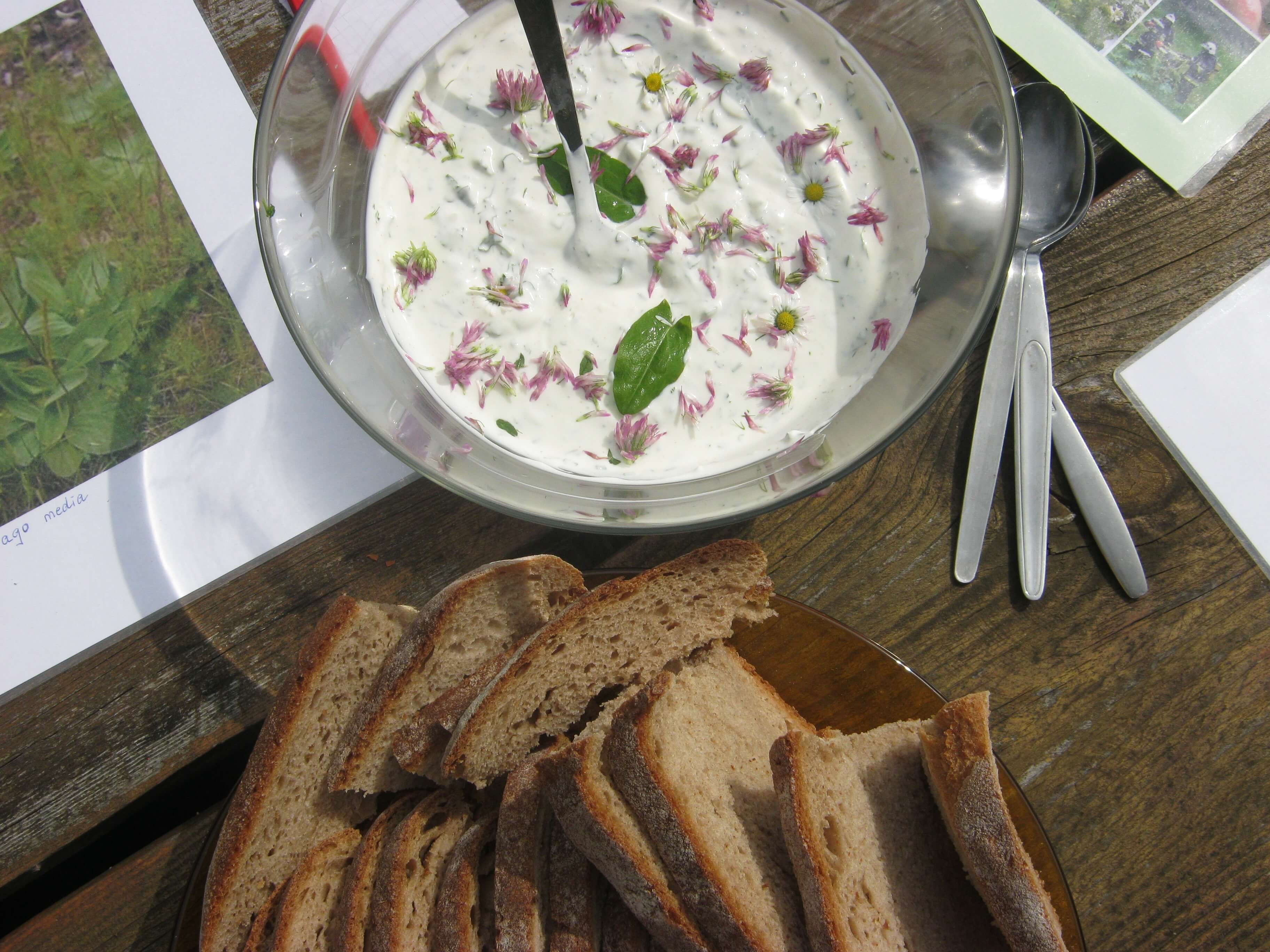 There will be a follow up activity in two weeks’ time, when Marcus Seuser will come to the Heidelberg International School and will show the data collected. 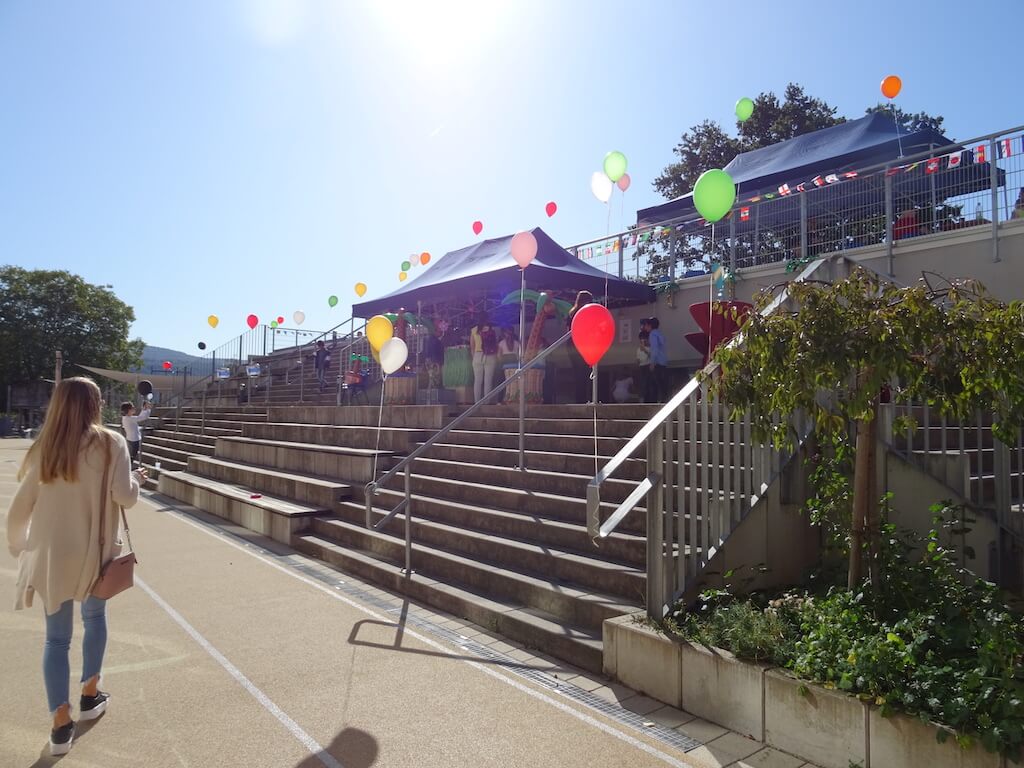 On Saturday, the H.I.S. community came together to enjoy the International Fun Fest 2019.

The playground was bathed in sunshine and the beautiful late summer weather, with bright blue sky and light breeze added to the fantastic atmosphere.

Staff, student and parents all contributed to make the event happen. Many thanks for running the activities, for providing food, taking pictures and for contributing to the PTG raffle.

A record amount was raised through the raffle – find out more about this from the next newsletter! 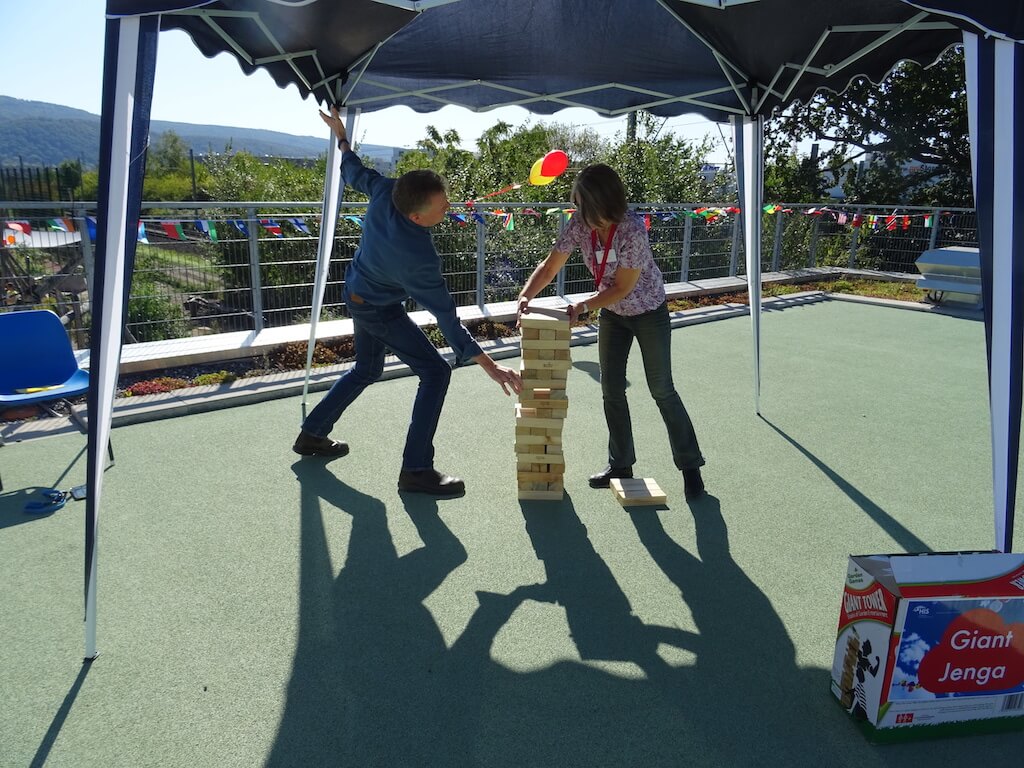 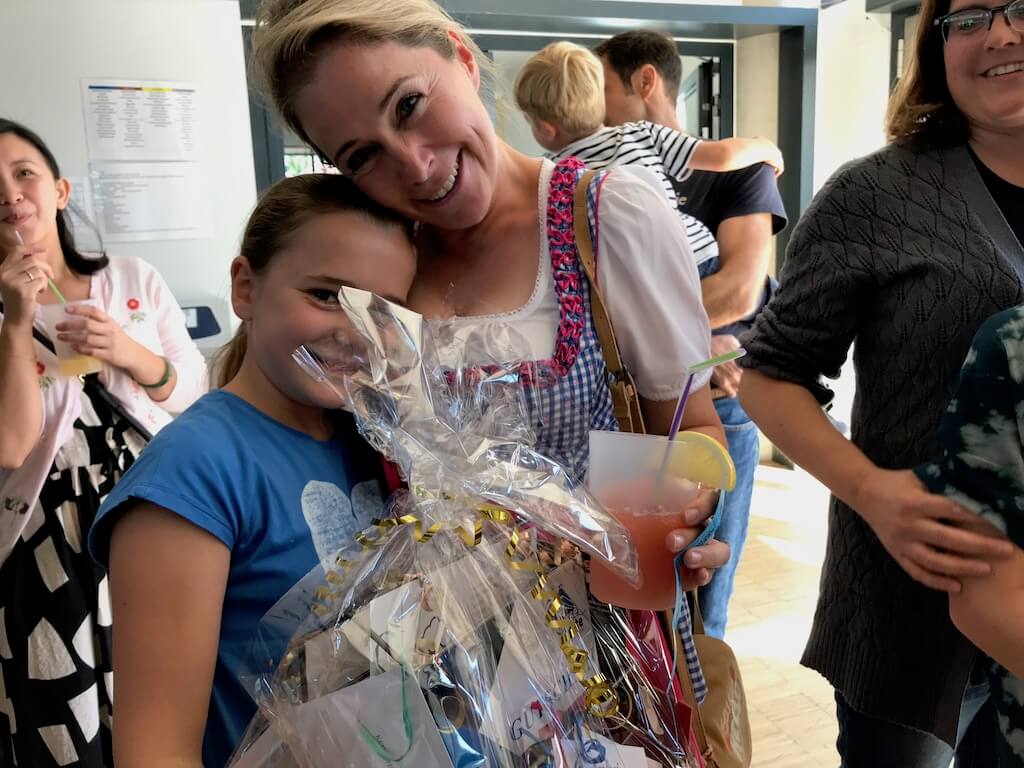 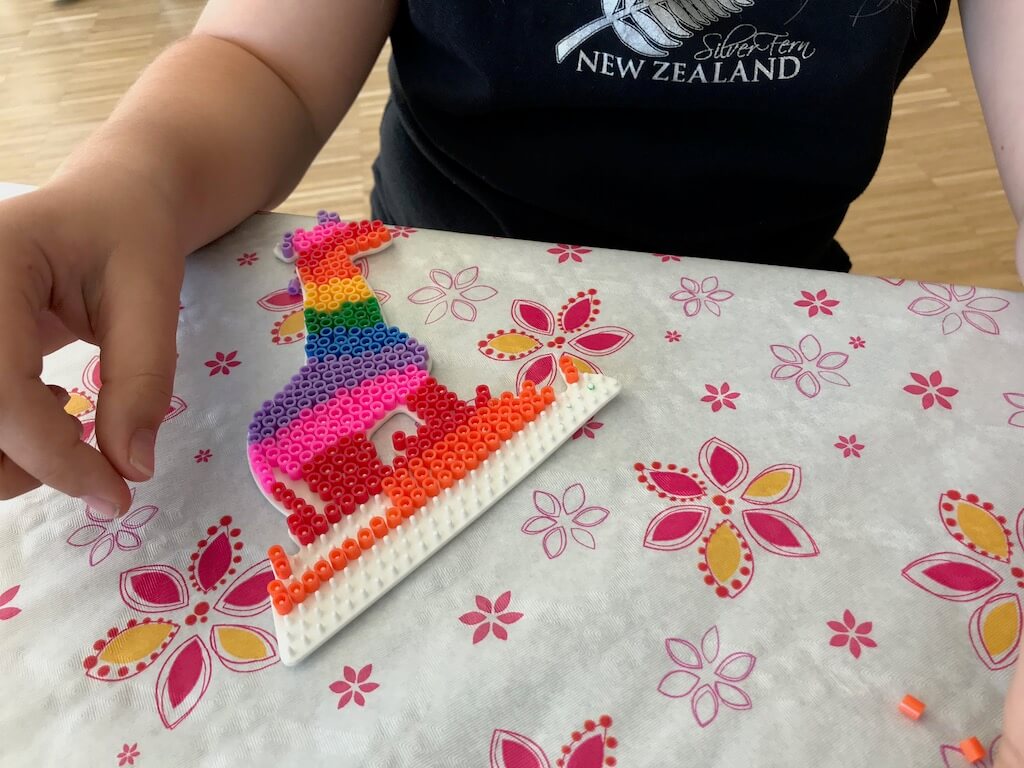 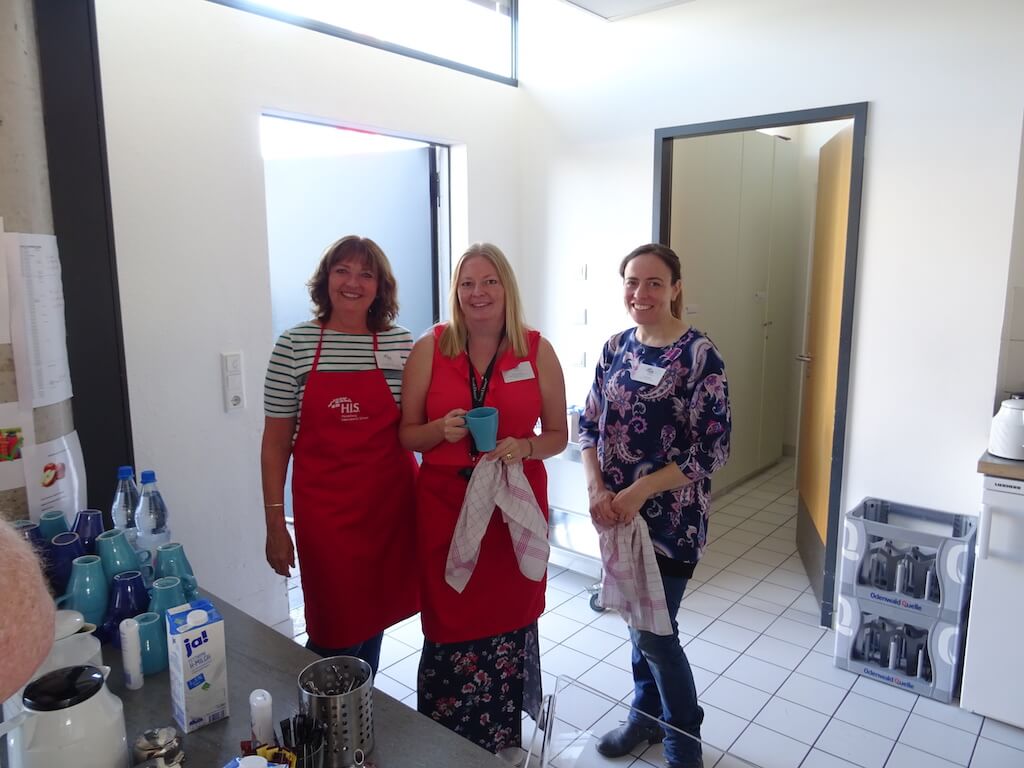 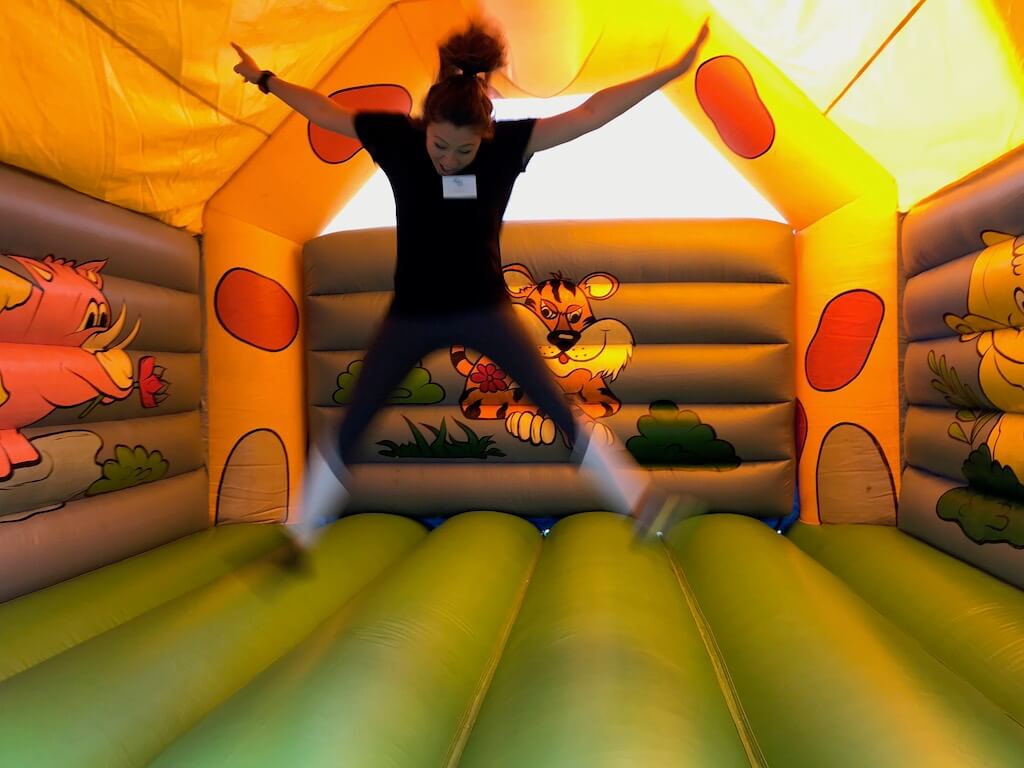 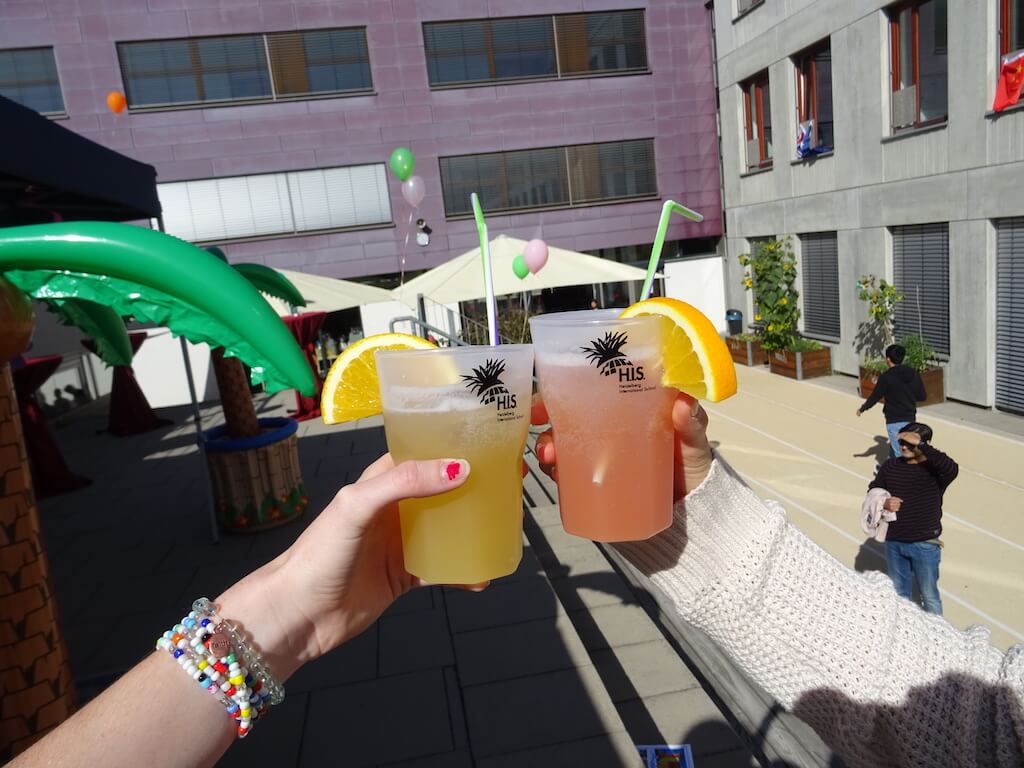 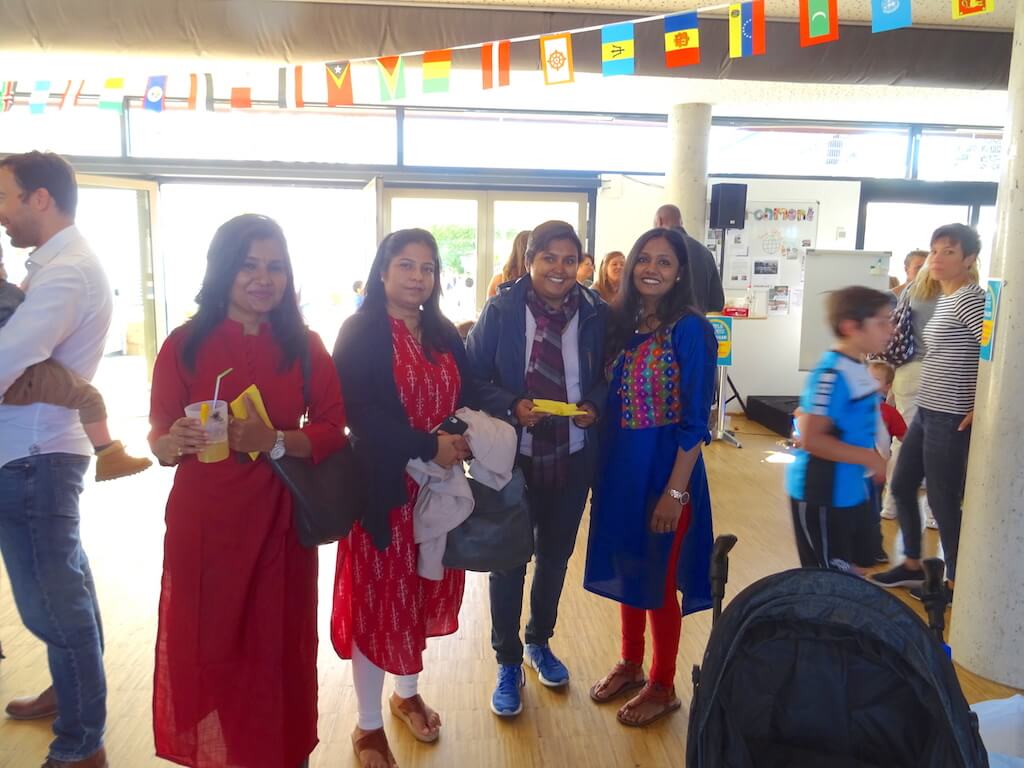 The annual Diploma Exordium Trip took place from Thursday 12th to Saturday 14th September for all Grade 11 students and three teachers. We stayed at the “Naturfreundehaus” in Zwingenberg (Odenwald). We canoed along the Neckar on the Friday accompanied by our instructor from the outdoor pursuits company Eventure and went on a hike in Zwingenberg. Then, on the Saturday, we visited a team-building and climbing centre in Mudau. The students were responsible for taking care of the whole group’s needs by carrying out special tasks. These tasks included cooking dinner, creating a shopping list or tidying up after a meal.
Have fun reading the grade 11 comments about his successful trip:
BK 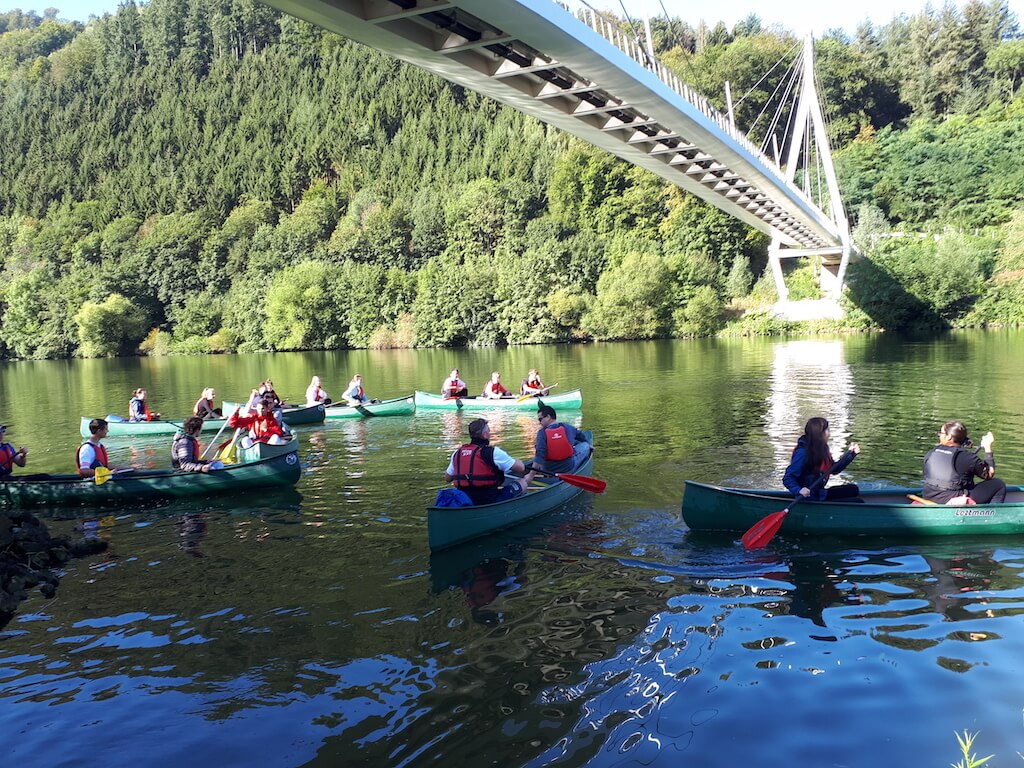 Preperation
The Exordium was an opportunity to come together as a class. And everyone was assigned specific tasks out of which we were on the shopping team and had to buy everything from the supermarket. We had to plan and communicate with the class regarding what to buy and made a list. And on the day we left, before boarding the train to Odenwald, we had to go to the nearby Kaufland. In order to minimise the shopping time we divided ourselves into groups of 2. We had to buy food for 21 people and it was so much fun to buy everything as the amount of food we bought was huge. We look forward to other trips like this.
Gowri, Adelia, Nici

Cooking
We were assigned the task of helping out with cooking dinner for everyone. To make this more exciting for everyone, we decided to grill. It started off with making the fire and setting up the grilling stand. The tedious part of it was the preparation. We had to slice vegetables, marinate meat, and garnish and dress the salad. Many people volunteered to help, which made everything easier and quicker. Although most of the people were meat-eaters, there were a few that preferred vegan food. So, to accommodate everyone, we grilled a good balance of vegetables and meat. With a lot of experimenting, we managed to understand how to work the grilling stand without burning it all.
We sat around the bonfire as the evening began to close in. Between the sound of our laughs, the smell of smoke and grill filled the air. It looked like the perfect time to share old stories, laugh at silly jokes, be grateful and get closer as a class. Ultimately, the idea of grilling was a huge success. The food turned out to be better than we anticipated and all our efforts had paid off. It was one of the most enjoyable experiences we had as a group and definitely one to remember.
Ishika, Andrew, Lennard

Tidy up
One important aspect of the trip, though, was food. During the Exordium, apart from going outside, we also ate. A lot. Which means that we also ended cleaning up stacks of plates. We thought it was an easy task, but…there were lots. And lots. And lots. Of utensils. Clearing, washing, scrubbing, drying, and organizing, it took the teams the better part of an hour to finish. By the time we were done, we were exhausted and could not look at another plate. It was a grueling task, but we tackled the job and did what needed to be done. And, well, since we were the only ones next to the fridge, well…we had a little added bonus to compensate for the hard work.
Alex, Joe, Joseph, Muhi

Canoeing On Friday we went on a six-hour canoeing drip on the Neckar. Throughout the trip, we were challenged to complete a variety of team activities. First, our guide Ralph encouraged us to form a star with the canoes. Although it was difficult, we managed to complete the task at the end. Halfway through, the students switched canoes on the water, while focusing on not falling in. Additionally, we built a pyramid with the canoes which required us to communicate and work together. Overall the experience was very enjoyable and we recommend it to others. Giacomo, Francesco, Kira, Leoni
Hiking
Hiking in Zwingenberg was amazing I loved it, but after 2 hours it started getting a little tiring… what didn’t make it feel tiring was the view in the mountain and I hiked with Frau Kress so I had company which was great. During the hike we saw a beautiful stream running into the neckar it was so beautiful the views were so pretty that I just kept on saying beautiful , amazing , pretty etc.
We walked from the Naturfreundehaus to the castle to the hike of the „Wolfsschlucht“ and back to the Naturfreundehaus all together it took around 3 to 4 hours and it was 9,9 km . I enjoyed and I thank Frau Kress for making the hike fun and enjoyable .
Shahad

In the Forest … Saturday morning we woke up, packed all our bags, cleaned our rooms and went down for breakfast. When we finished, we packed up the last things, and as soon as everything was in order, we walked to the train station where we would be getting picked up by a bus. The bus brought us to the Eventure house, where we received our harnesses and helmets for the high-rope climbing we would be doing.
Our first activity was a team-building exercise. It consisted of an arrangement of steel wires suspended between trees, half a meter above the ground. Under the wires there was “an imaginary swamp”, so if anyone fell from the wires, everybody had to go back to the beginning. Two teams started on opposite sides of the course, and as we got closer, we had to work together to get to the end without falling. We succeeded at last, after about 50 minutes, however considering that we were a group of 20, we did really well.
After this, we walked a little further in the woods, and we got additions to our gear. Carabiners and cow tail ropes. We got some further instructions, because now we would be going higher up in the trees to complete some courses that required some clever footwork. We all needed partners to check that our cow tails were secured properly on the overhead steel wires. When we had finished, we needed a way down from the tall platform we all stood on, so we abseiled down with the help of our guide, Klaus.
Our last activity was one that required a great deal of nerve, and therefore it was voluntary, not required. The task was to climb a ladder up to a platform, about 7 or 8 meters above the ground. Hanging a bit away from the platform was a football. You had to jump off the platform. If you could, you should try to hit the ball as well. You were suspended on ropes, held by 10 classmates on the ground below you. This task was really quite scary, and focusing on hitting the ball only made it a little bit better. Most of the students in the class did it, and I think that was quite amazing.
When we all finished, we went back to the main house, took off our gear, and ate some pizza that had been ordered while we were away.
Overall, a great opportunity, and we all had lots of fun.
Laura, Nora, Josefina

For the past 10 years H.I.S. students, staff and parents have supported the Waldpiraten Camp in Heidelberg. The Camp runs a therapeutic, recreational programme for children affected by cancer. http://www.waldpiraten.de

Our annual Waldpiraten Run will take place again this year:

The whole school will be involved and students and staff will be running laps to raise money on the day. Please support us and the Waldpiraten. 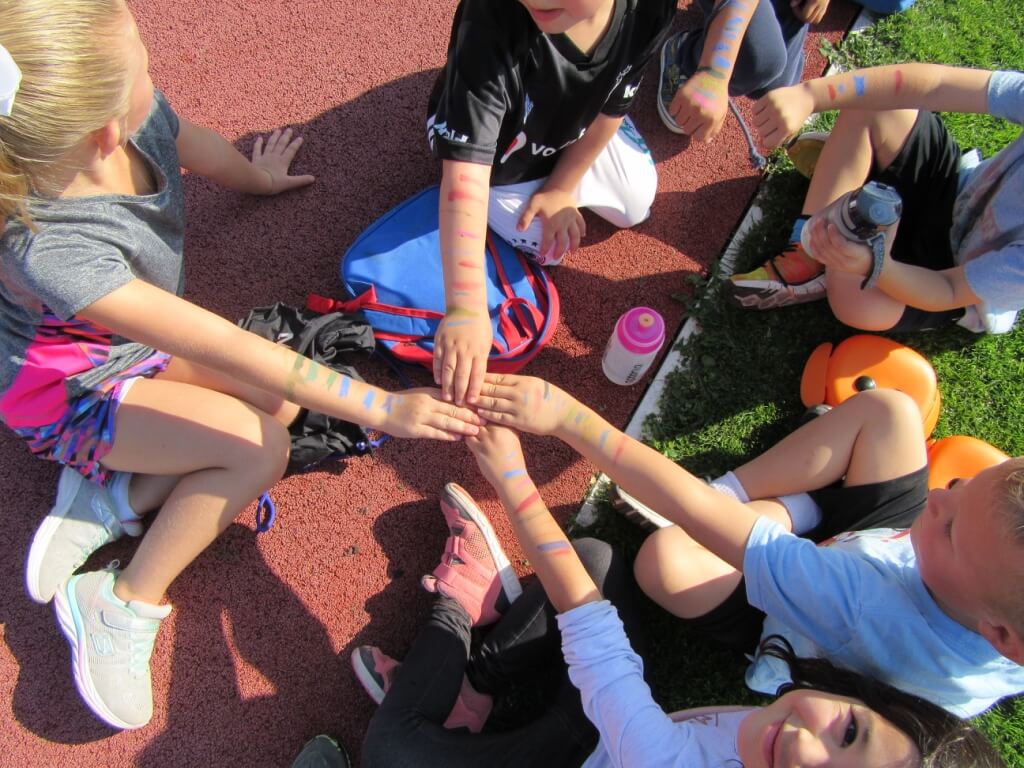 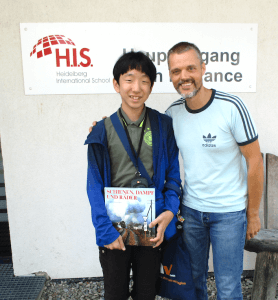 In the week before school started we were happy to receive a visit from Tatsuki Yamamoto and his mother.

This is not the first time that Tatsuki has returned to visit since he was in Grade 3 in the 2015-16 school year and although he only spent one year at H.I.S. there were many memories we could share. He was excited to meet some of his former teachers and toured the school, including the extension, which was not even planned when he was here.

Tatsuki has kept in contact with members of staff at H.I.S. and regularly sends cards including his own drawings. His picture of the school still takes pride of place in the English Support room.

Tatsuki is currently in 7th Grade in his home country of Japan. He misses his friends in Germany, but is enjoying life.

We wish you well Tatsuki and we hope to see you again in the future!

Last week 3 sun sails arrived just in time for the beginning of the school year to provide shade for students, staff and parents at break time or after school. They cover the chess area, the sandpit and the area next to the slide. 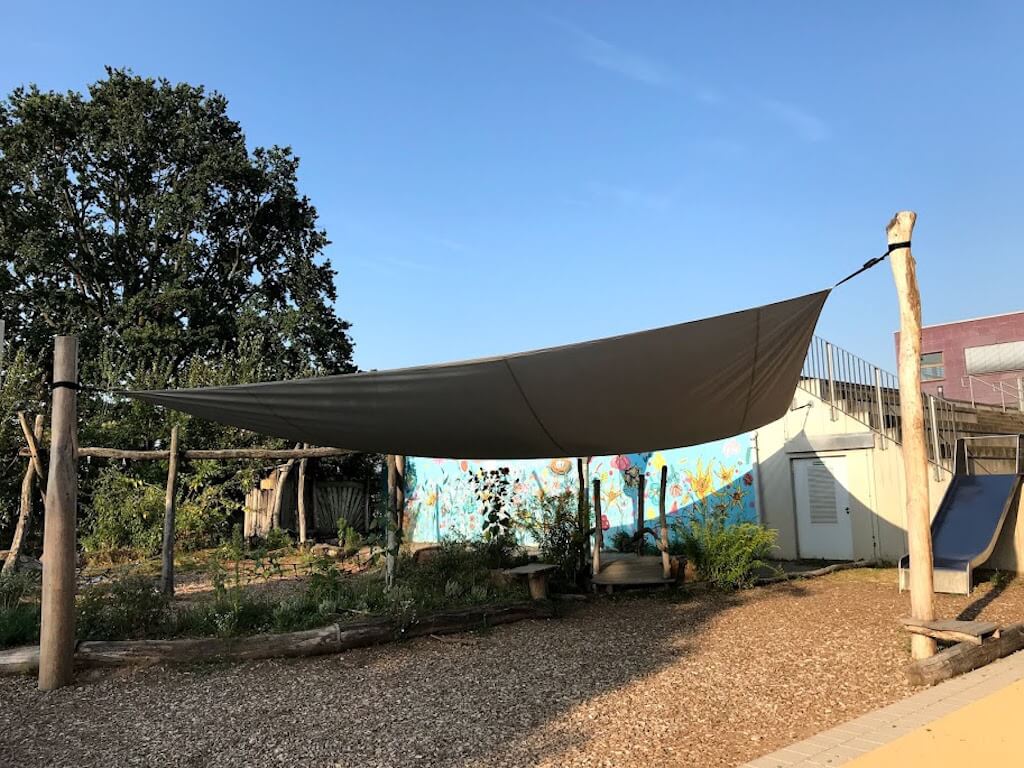 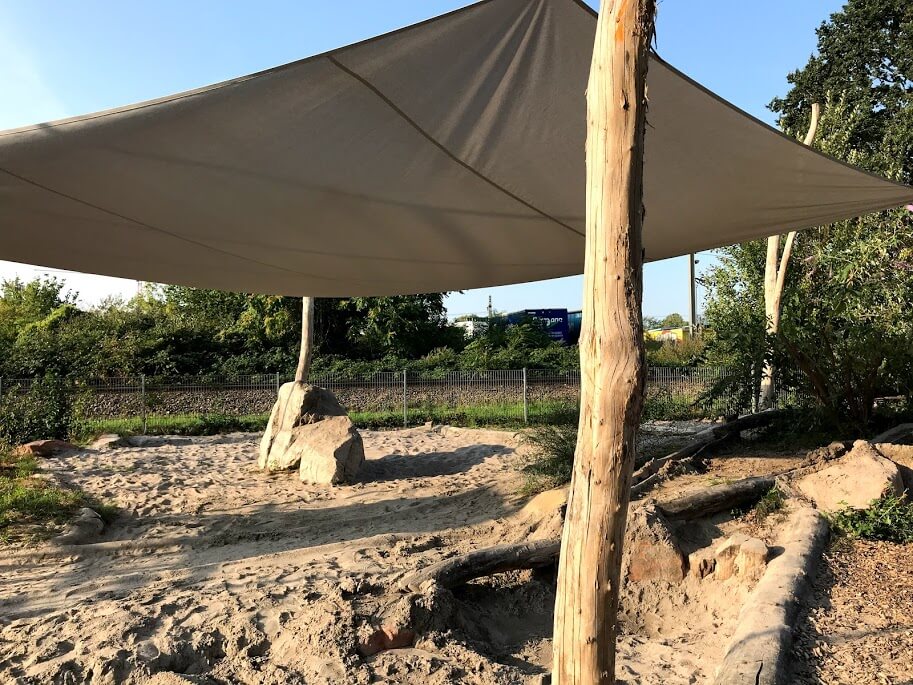 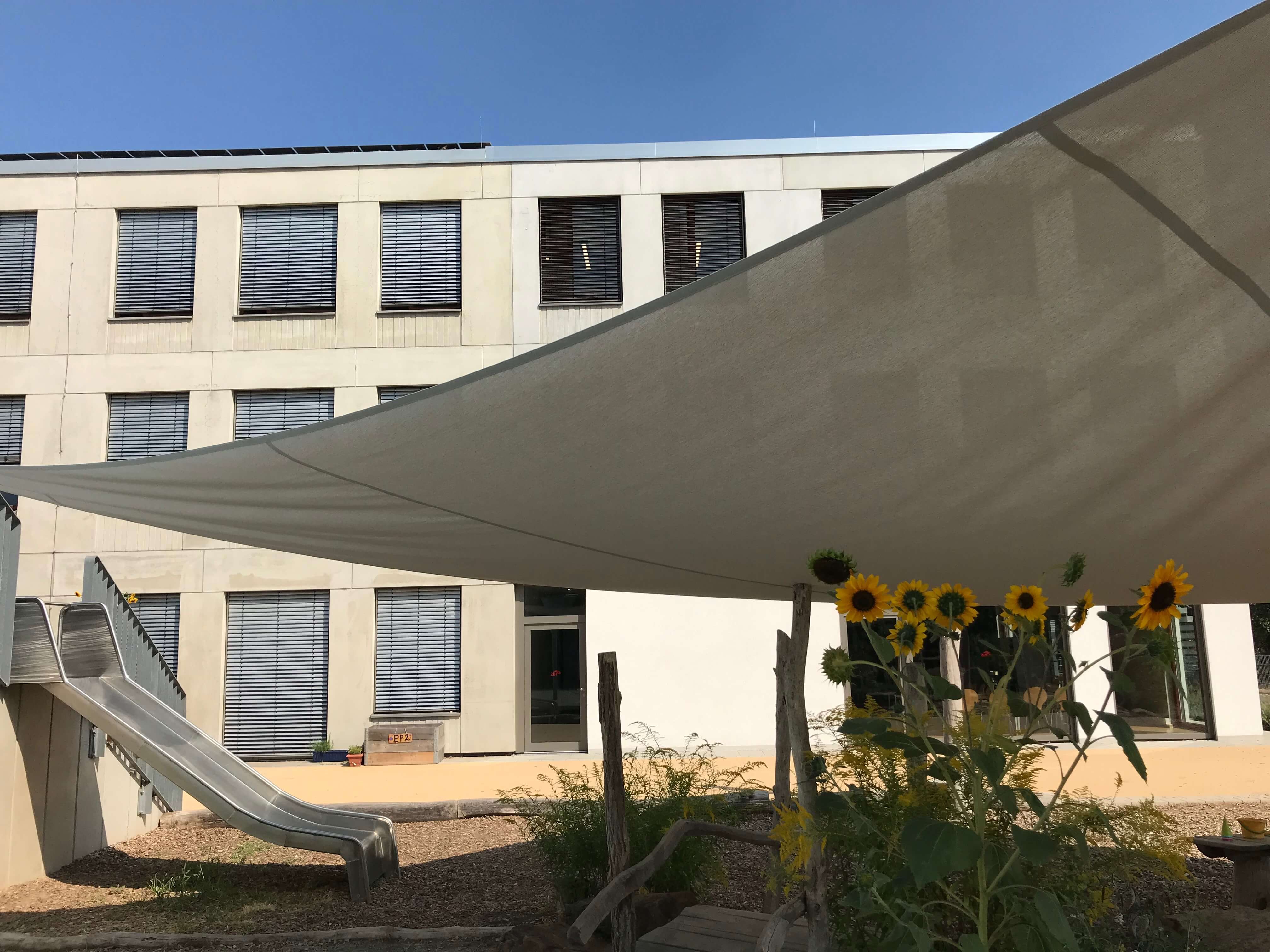