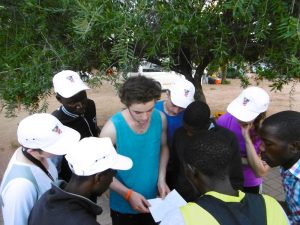 Since December 2016 I have been training to take part in the Harambee Challenge.

A 740km petition run from Mayana to Windhoek, in Namibia. The run would happen over the course of three days, where we would each run 20km per day, in a relay formation. However, no German fresh-aired run could have prepared me for the trip that was ahead…

The whole trip lasted two weeks, and they were two of the most amazing weeks of my life. 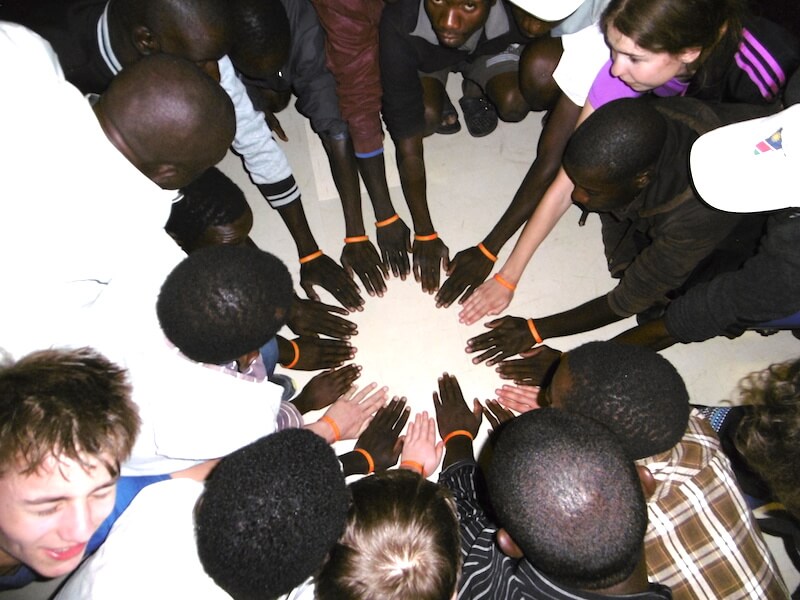 We left for Namibia during the Easter Holidays, after months of anticipation and excitement. Monika drove us for 9 hours from Windhoek, a large city, to Mayana, a small, undeveloped, but beautiful village in the northern Kavango region. It was a drive that took us back through generations in time. But this is what our run was for: a petition for better living standards (thanks to access to clean water, electricity, better education, and business development, just to mention a few). Our demands were clear and simple. We wanted our petition to be heard. 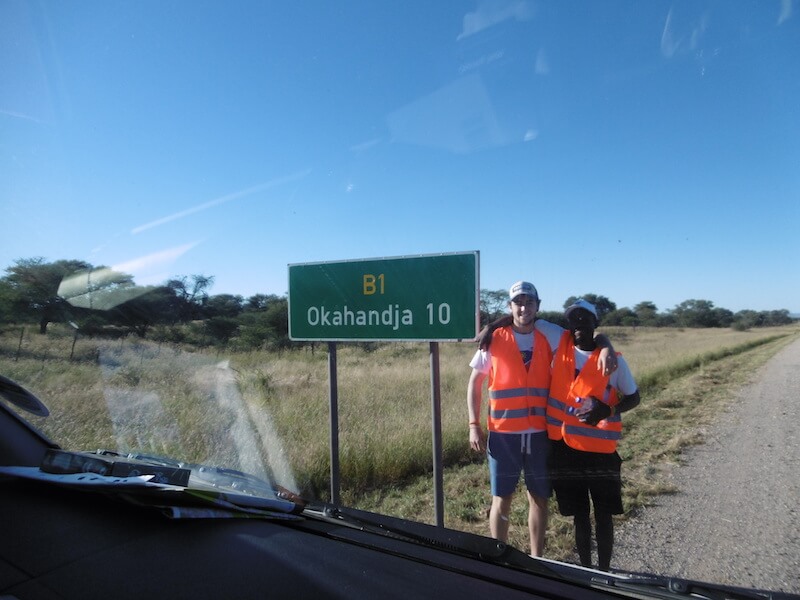 The running itself went without problems (other than a few blisters and sore legs), thanks to plenty of training and helpful support from Frau Handwerker. 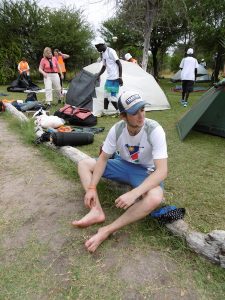 The heat was no problem for the runners from the village, however, me and three others from the german team struggled through the first couple of training sessions. At 3pm on the third day, we all arrived in Windhoek. It was the Mayana runners’ first time in their capital, so they were very excited to be in such a big city.

On our return back to Mayana, we called a village meeting to tell them our story and to keep everyone up to date on exactly what had happened. Mostly everyone was supportive. Rumours had been going around that we had been arrested and were in prison so some were very surprised to see us back so soon! This was by far the biggest thing to have happened to the village, so we were treated very well. We were treated to a traditional dance, lead by the Mayana dancing group, as a way to thank us for the work that we had put in to improve the village.

Throughout my trip, I met countless amazing people and made some lifelong friends. They taught me many things (from making good fires to living a life with only the things that matter to you), and I believe that we taught them a lot too. My goal from the start was to be able to make a change in the village, and now that the petition was delivered and news of which is spreading around the country, I believe that big changes are just around the corner for Mayana. 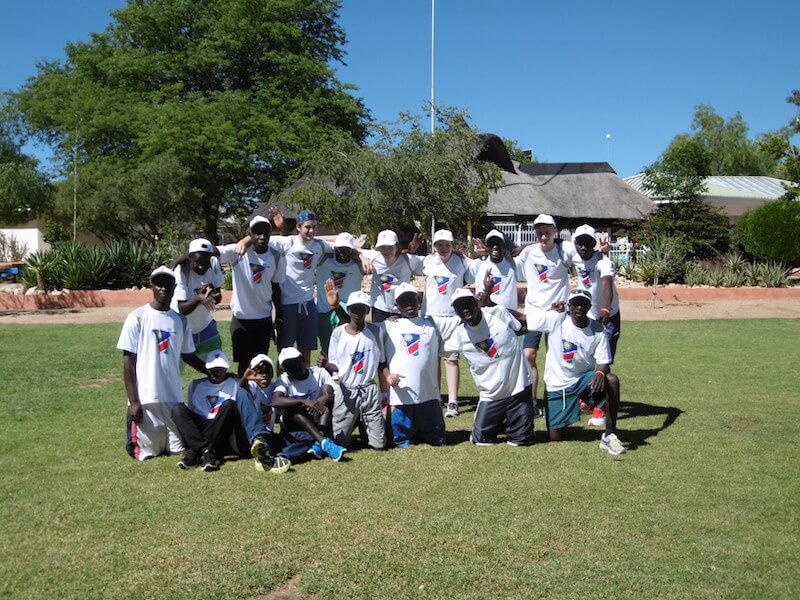 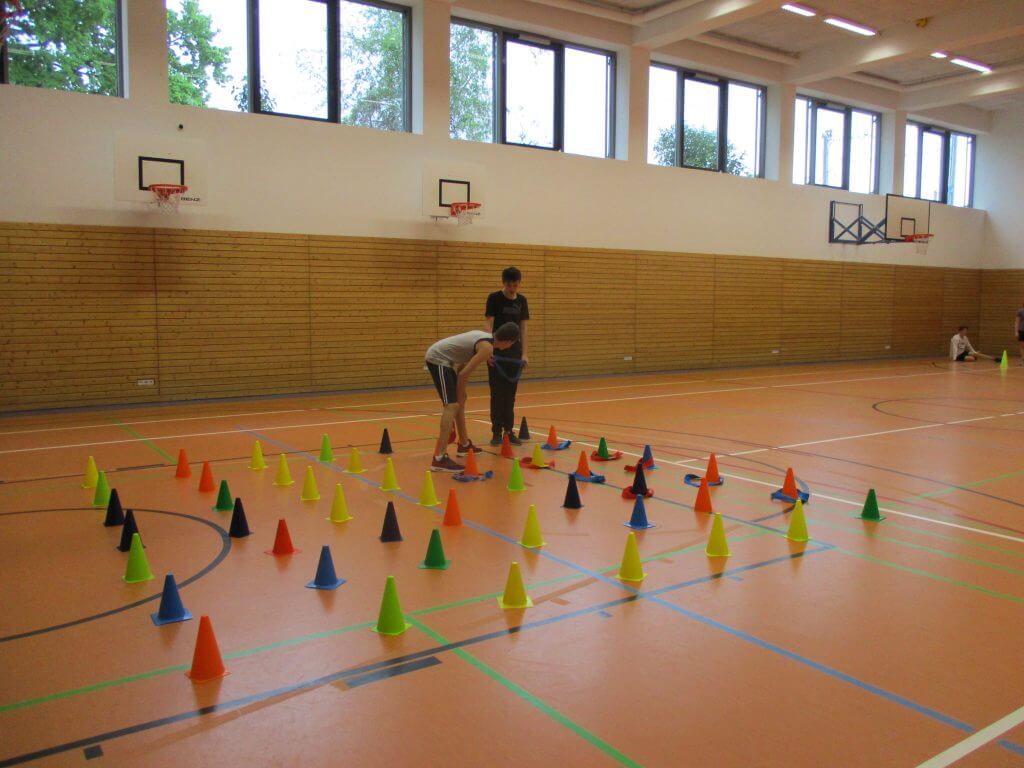 Students in Grade 9 have been working in Groups to design a Game as part of their Create a Game unit.

Take a look at this one which is Connect 4 Sports Edition on our Facebook page.

Well Done to all the students.

The Grade 3-5 Assembly welcomed Tom (grade 11) on Thursday to hear about his upcoming trip and sporting challenge in Namibia for M.C.P.

Many of the students recognise Tom (and know he makes good waffles!) but they were surprised to hear about the 3-day Harambee Challenge he will be taking part in this month.

He will be part of a 25 participant team, mostly from Mayana itself, who will run from Mayana in the very North of Namibia  to Windhoek, the country’s capital. They will carry a petition to be handed over to the government asking for improved living conditions, infrastructure and education for Mayana.

The total distance of 750km will be covered by the team and Tom hopes to run 75km himself. As well as the actual distance, he will have to deal with aches and pains, refuelling on the go and sweltering temperatures. However, Tom has been training for this moment since January and he is well prepared. 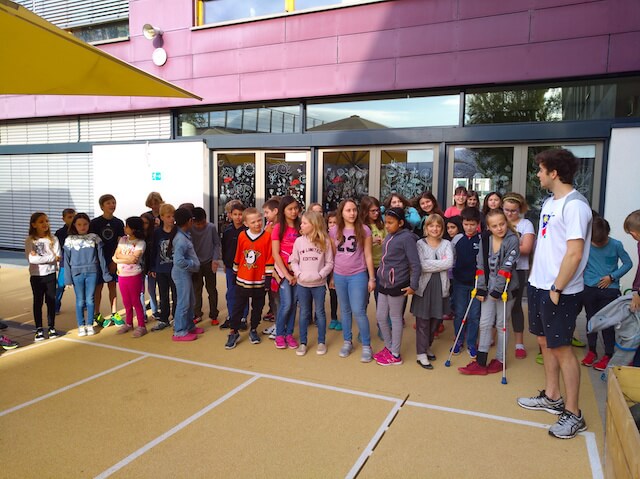 The students had many questions and also some advice for Tom to help him on his challenge. We then wished him well and sent him off on his journey to Namibia. We will be looking out for updates on the progress of the run and look forward to hearing all about it when we return after the Spring break. 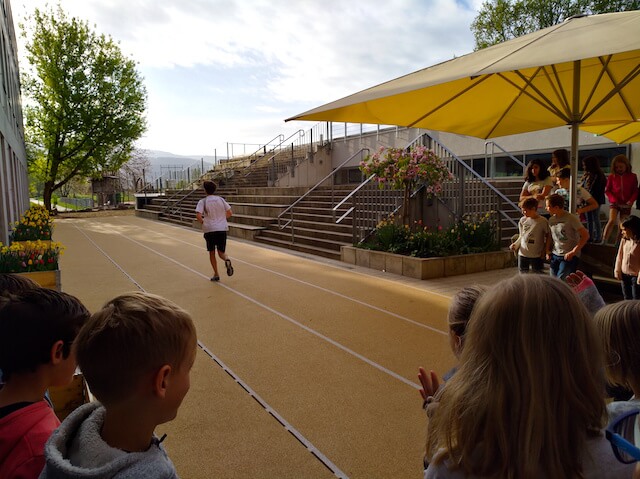 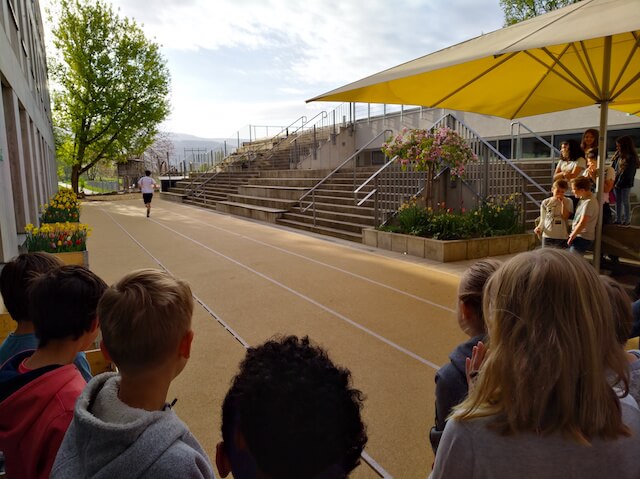 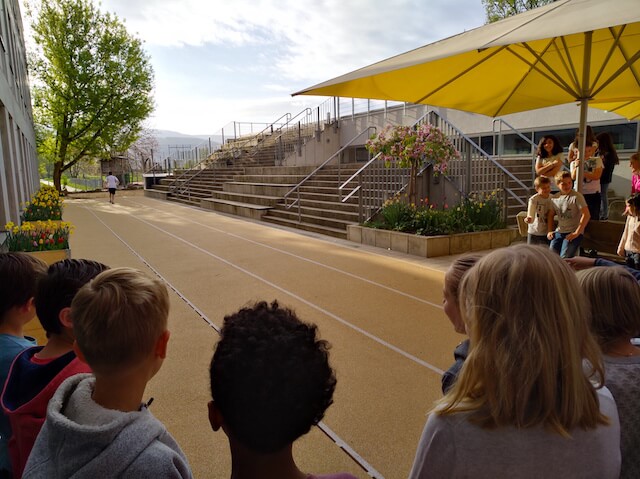 Please join us for our annual German Evening at H.I.S.! 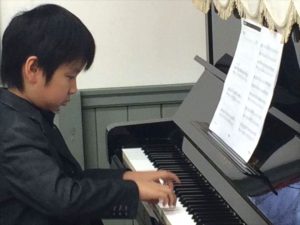 “I and my family moved from Nagano to Tokyo.

I am continuing piano.

And recently, I started to play Japanese chess.

And I also started to use my laptop, so now I can read emails.

This year, I will try for Mathematics Olympic in Japan.

I want to hear what my H.I.S. friends and H.I.S. teachers are doing.

Please say hello to everyone!”

Mr Raw has my email address. 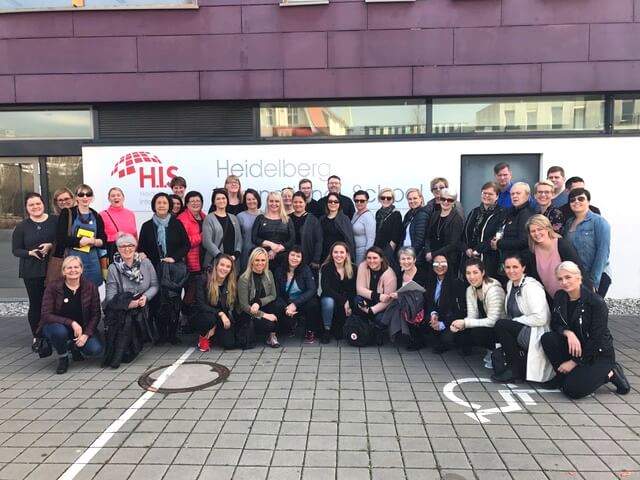 Back in March, H.I.S. welcomed 40 teaching staff from the Myllubakkaskoli in Keflavik, Iceland.

They were visiting Heidelberg and learning about the German school system and other educational opportunities in the Heidelberg area.

It was probably the largest number of visitors we have had at one go during a normal school day and it was slightly daunting and distracting for our students to have such a big group coming into their classes, but as always the students approached our visitors with respect and curiosity.

Our visitors were impressed with the students and the school and also that we had had Icelandic students enrolled in the past. It was an interesting day for all! 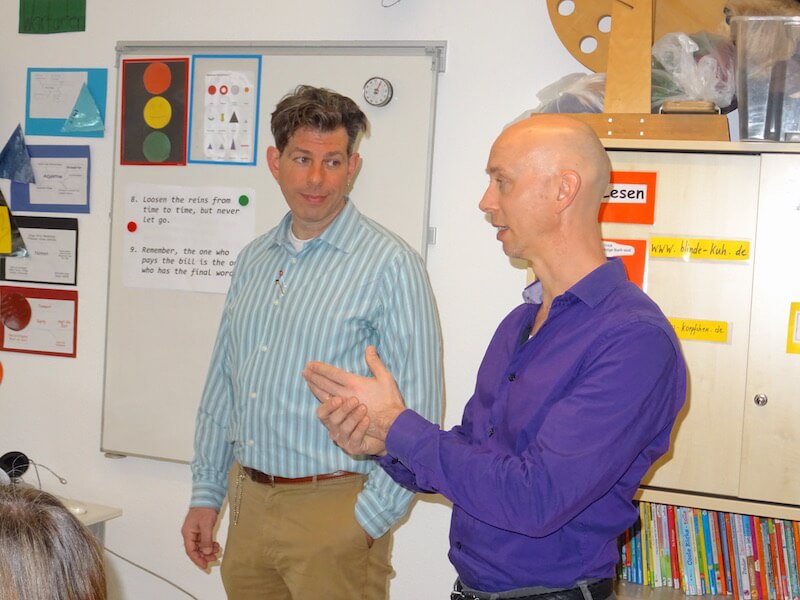 We looked at what recent research says about how this affects our brains. We also looked at what teachers see in school related to screen time in their students. 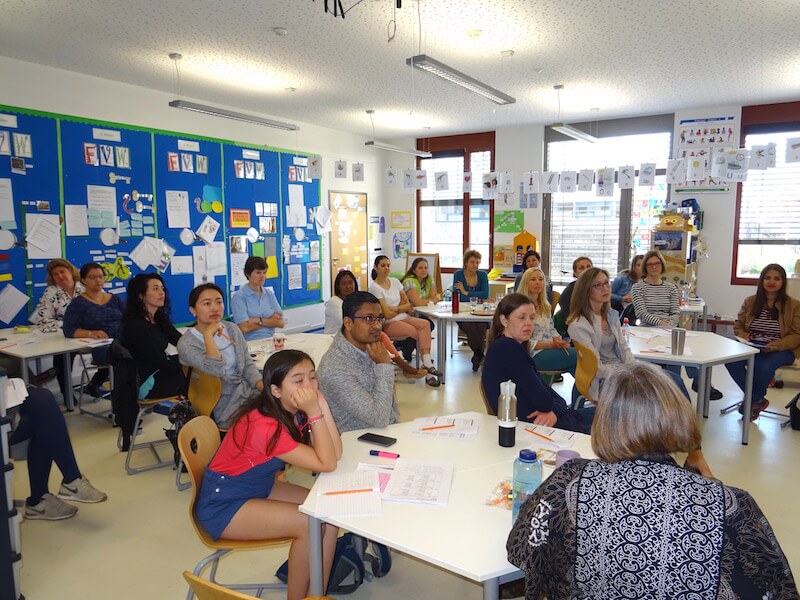 A great deal of information was shared, questions answered, difficulties shared, discussed and suggestions made to solve them. Both William and Coco, shared interesting ideas, concerns, and suggestions for modulating screen time and why this is important to do. The attending parents helpfully filled out Coco’s questionnaire to help her collect data for her exhibition project. 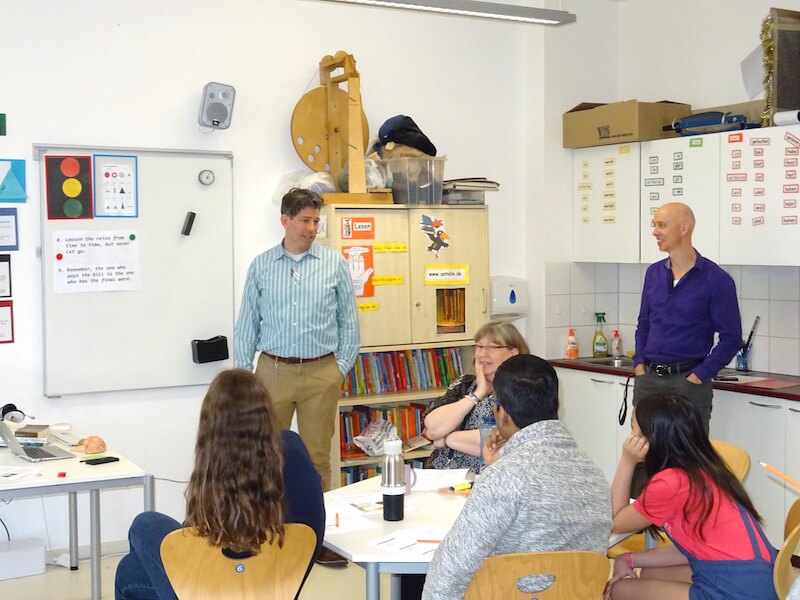 They are a series of thought provoking worksheets to help you plan, and decide on what and how you will limit screen time. Please go to http://www.whatdowedoallday.com/limit-screen-time/ to download these useful documents.

Feel free to contact us if you have any questions. We cannot recreate the workshop for you, but we would be willing to offer another session if there is enough interest.